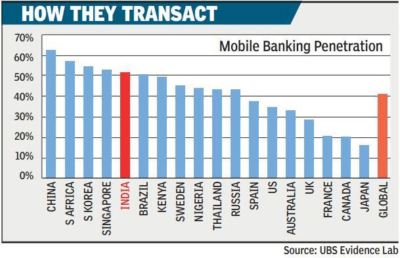 The world- wide mobile banking penetration and apps launched figures have been moving upwards year on year. The above statistics are a clear indication of mobile banking’s popularity in the last decade. With startups entering the fintech arena, digital wallets soon followed mobile banking. Digital wallets being user-friendly and easy to use, customers have taken a liking to it in a short period.

Though wallets are a popular choice when compared to the traditional lengthier forms of banking, they have a few painstaking activities associated with it. Some of the activities are :-

Now to overcome these barriers and make mobile banking hassle free and more secured UPI was launched by the NPCI in India. UPI is a payment platform that allows instant money transfer without providing account details.

With the likes of UPI making an appearance in the payments space, mobile wallets usage has taken a dip. However, in my view, the implementation of the below factors could still boost wallet usage post -UPI launch.

The financial sector has moved from online banking to wallets to UPI. Wallets are a stop gap arrangement till India achieves complete digitalization. Being a better way to access accounts, UPI has no doubt become “go to app” within the short period after its launch but however, wallets score some points in below aspects.

With or without the desirable features being implemented (few of them depending on RBI) Wallets will continue to be in India’s financial arena and contribute to the financial inclusion. As in the case of Teknospire’s MAkash. Having helped Valapad village to become an e-wallet-literate village, it has become a source of inspiration to other wallets and represents the existence of stand alone wallet post-UPI launch.