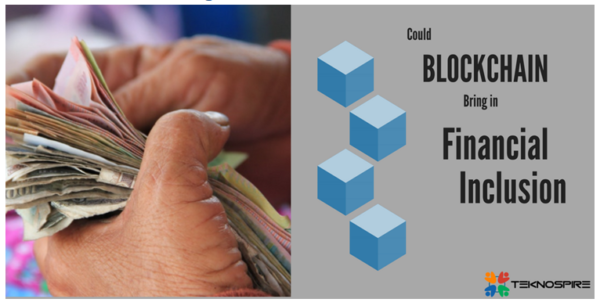 Living in an Urban city I never had issues in spending money be it cash or electronically. But when India was under the spell of Demonetization, despite having sufficient funds in my account I was not able spend them for one simple reason that – the vendors, vegetable sellers or rickshaw pullers didn’t have the bank account. It is fascinating to know that while in India where mobile penetration is 65-75%, almost 19% of India population is still unbanked (according to a report issued by Omidyar Network). While setup cost, connectivity and less profit margins are the major reasons for banks to work in remote areas, but lack of KYC and valid documents make it hard for immigrants [from rural areas or neighbouring countries] in urban cities to open a bank account.

Could Blockchain technology help in overcoming these challenges?Indeed, the technology offers some unique characteristics that allows the banks and financial institutions to tailor their products and services to encourage ease of use for banked and under banked. Just for example a Philippines based firm Coins.ph offers its users a blockchain-based platform that is mobile compatible and allows users to send money at a more affordable and faster rate. Combining the power of digital currency with existing branch infrastructure they can help individuals in paying bills, loading their wallet, buying of bitcoins or Ethereum and Scan & Pay for cashless payments.

Let’s dive a bit deeper to know if blockchain has the potential to serve the unbanked.

The end-users [in this case the unbanked population] does not bother which technology you use and provide a solution, however they are keen on solutions that –

Luckily all these points could be answered by BLOCKCHAIN. So, we could for now say yes Blockchain could help the unbanked. But then how would be the implementation and execution? Before jumping onto that, let’s see what all areas could blockchain help the rural people

How Could Blockchain Help the Unbanked?

Blockchain a neutral network that eliminates the need of third parties/intermediaries could help in inflating banks profit and reducing cost, but could be advantageous to other areas–

We have the virtual presence or virtual identity on the internet, but we do not have control over what part of our identity is accessed by whom and used for which purposes.  Just for example when drought/famine hit a region, government and international grants are released, but never we could trace the people who are under stress. Or for example, the refugees or illegal immigrants unless they have a proper ID no government organization could not help them. With Digital identity on blockchain, it would be easy for people to get access to aids and development. As reported by techcrunch,”Bitnation is using blockchain to help solve the refugee identity crisis in Europe. Their system currently helps Syrians get an “emergency ID” to cryptographically prove individual identity and family relationships.” With the digital identity in place it would be easy for government to roll out aids and easy tracking of the grants received and its usage.

As mentioned by Victor Sandos in his post about a book The Mystery of Capital: Why Capitalism Triumphs in the West and Fails Everywhere Else” by Hernando de Soto – Five-sixths of the world is poor but the 80 percent [of the poor] majority is not, as westerners often imagine, desperately impoverished. They possess crops, land, home, gold or other assets that in never valued by the system. These dead assets could be verified, identified and converted into a digital asset by blockchain. The owner then could derive money from it by lending, selling or mortgaging. Just imagine a rural person who owns a farm, a tractor and two cows. Although the vehicle and land might be a registered property but they are yet not a means of revenue generation. How about putting these things on a blockchain network assigning an ID to it, and then could be sold, put on rent or mortgage on market price thereby generating income out of it.

How often do you trust the land deeds issued and stamped by local authorities about the ownership of a land? In fact, a news report from CNBC says that – It is estimated that $700 million is being paid in bribes at land registrars across India. Blockchain could help resolve this issue for farmers or small businesses who struggle to get the ownership back to them. In fact, the government of India’s Andhra Pradesh state has partnered with Swedish start-up ChromaWay to build its blockchain-based solution. The data would be stored in encrypted, tamper-proof huge groups, that cannot tamper.

But how could Land ownership help in financial inclusion? Most of the rural people do not have bank accounts/avail banking services due to high cost, no banks nearby and do not have high financial portfolio that could help banks in generating profit. Now if land ownership maintained on a blockchain is linked to a bank account, the owner of the land could receive grants directly on it. Also, the digital asset could be used for mortgaging purpose.

Imagine an immigrant who wishes to transfer money to his family in the rural area, we have organization helping with remittance,but the charges are quite high and time-consuming process. Wouldn’t you wish for a real-time transfer or if you could pay your bills from any location/currency? Blockchain could be a savior here. Some of the cloud-based mobile payment solutions like Regalii and Ripple are helping immigrants and their families to transfer quick money/pay bills. While Regalii allows immigrants to pay bills through SMS from anywhere in the world, Ripple users need to load money in their wallets and could transfer it anywhere.

With no intermediaries involved the service charges are reduced making it a viable option of cross border payments.

Advantages of Using Blockchain Based Solution For Financial Inclusion

Risks Associated With Blockchain Based Solution

While we saw the pros and use cases look classy, there are some risks associated with blockchain based solutions like –

While we see the Blockchain technology has the potential to connect the masses to the mainstream, it also comes with a risk of being new, untested technology. While in India many pilot projects have been running,but no real blockchain based transaction has happened yet, is it all for real or a bubble. Only time can tell. But the way fintech is shaping and determined to grow financial inclusion; you never know if you bought fresh vegetables from a nearby farmer and paid him through India own cryptocurrency.